A Blast of 90s Weirdness: The Bone Chillers Series

For some reason (My unnecessary enthusiasm? Irony?), a lot of people have been checking out my fan post about the Bone Chillers series of horror books from the 90s. And that is awesome. Either there are more closeted Bone-heads (I just made that up) than I ever expected, or more people are eager to discover disposable bits of retro weirdness and they just happened to stumble upon my blog.  Either way… great! I’d love to spark a new national conversation about something that’s near and dear to my heart.

So I thought I would offer a quick run-down of the series, with helpful links to Betsy Haynes’ Amazon page. (All of the titles can be purchased as used paperbacks, but I wanted to spotlight the ebooks. Miss Haynes deserves to earn some money for all the hours of enjoyment that she gave me and other little weirdos like me.)

Anyway, here are the first ten books in the series. But be warned, some of these may be inappropriate for younger readers (or fans of good literature).

Out of the whole series, this is the only one that feels like one of those Are You Afraid of the Dark-style morality tales. It might be imitating the Goosebumps standard a little too closely. Still, the big climax is fun and Hayne’s simple-yet-overdramatic prose is there from the beginning. 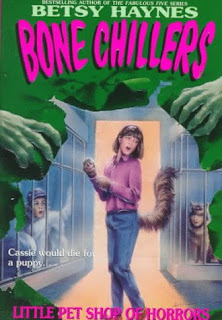 The cover is better than the actual book, but it’s cute in a low-stakes, we’re-turning-into-animals kind of way.
Back to School 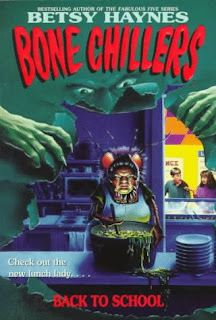 Perhaps the best book in the series, and an inspiration for the best episode in the TV series. People eat bugs. They turn into bugs. It instills a natural fear of lunch ladies, which is probably for the best. 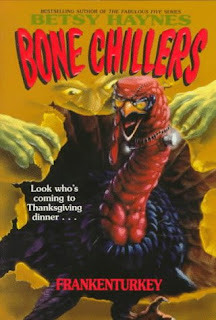 There are so few Thanksgiving-related books out there. And while the sequel outshines this one in every way, it’s still a fun story that doesn’t squander the awesome title.
Strange Brew 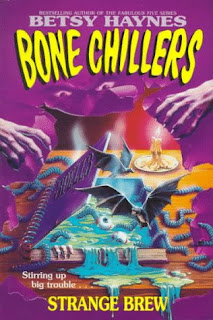 I know I read this one as a kid, but I honestly have no recollection of it. The title and blurb tell me that it’s about witchcraft, but it must not have been that memorable. If you’re interested in witchcraft-related young adult books from the 90s, check out the similar Shadow Zone series instead. Those books are pretty underappreciated, too.
Teacher Creature 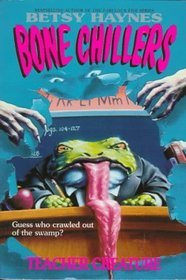 Another classic that inspired a truly great episode of the TV show. It’s a tale as old as time (kid finds out his teacher is a monster and no one believes him). Pretty Hitchcockian. And the TV episode is an acting showcase for Laraine Newman from SNL, who somehow falls in love with a coworker who’s very clearly a toad-monster.
Frankenturkey II 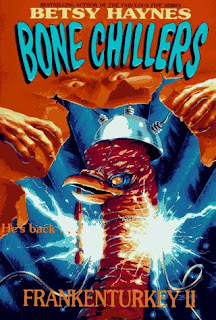 (Note the Godfather-style pluralization. This book is too classy for anything other than Roman numerals.) Again, not much to say here, except that it’s a sequel to Frankenturkey, and it’s a lot better than the original. And it also highlights Haynes’ tendency to have her main characters hatch really stupid plans.
Welcome to Alien Inn

Family checks into a motel that’s run by aliens. Alien Inn is a tad slow getting started, and the parents are frustratingly oblivious, but overall the story is a lot of fun. Tons of good cliffhangers.
Attack of the Killer Ants 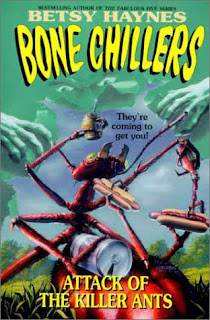 I did not read this one… Which is a shame, because killer bugs are awesome.
Slime Time 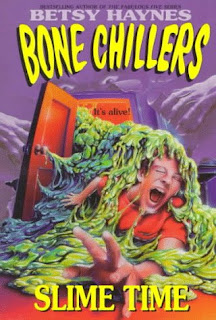 This is another favorite of mine. A kid creates this mucus that starts to spread everywhere. It’s a Blob-type situation, but the whole thing is played for laughs. For those who enjoyed the wackier Goosebumps books (How I Learned to Fly, You Can’t Scare Me!), this one is a low-rent equivalent of that.
All-in-all, the first ten books in this series are pretty consistently great. Well, not great. But they’re fun. And they have more of a variety than Goosebumps, which really doubled down on its formula as that series progressed. If you have an Amazon Prime account, you can read a lot of this stuff for free. And believe me, it’s worth every penny.
Posted by Evan at 3:24 AM No comments:

Survival in the Sewers

Survival in the Sewers is my latest young adult book. Like the classic Choose Your Own Adventure series, this action story has a cliffhanger at every turn, and YOU decide what happens next. Will you survive? 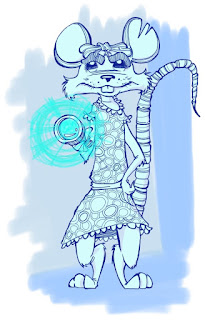 There’s a stink in your new house—a horrible, horrible stink—and you have to figure out where it’s coming from. Even though your mom tells you no, you sneak outside and discover the entrance to the sewers! You really, really, really don’t want to go down there…

But then you hear a voice! “Help me!” someone says. Who is it? Why is she alone in the sewers? Why is she screaming for help?

You decide to go down there to check it out. Perhaps you’ll be a hero! At the very least, you’ll find out what’s causing that horrible smell. 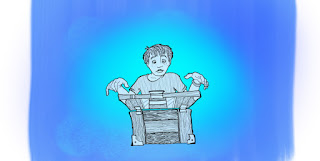 You sneak into the sewers, but there are so many tunnels down there. So many choices. Where do you go? What will you find? Will you search for cursed treasure with a pirate and his albino parrot? Will you hunt down the world’s biggest alligator? Will you race through the muddy streets of an ancient city full of giant rats?

YOU make the choices. But be careful: not all choices lead toward a happy ending. And that giant alligator is looking awfully hungry…

Email ThisBlogThis!Share to TwitterShare to FacebookShare to Pinterest
Labels: action, choose your own adventure, evan purcell, fantasy, horror, sewers, survival in the sewers

2016 was an objectively bad year. I try not to dwell on the negative, mostly because I like to live in blissful and purposeful ignorance when it comes to global warming, celebrity deaths, hate crimes, and all the other signs of the apocalypse that we were subjected to this year. Long story short, I’m going to stay away from America for a bit and hope against hope that things will settle down before I return.

In the meantime, I am cautiously optimistic about 2017. I mean, life has to go on, right? Well, that’s what I’ll keep telling myself during the imminent nuclear winter. But barring the complete destruction of the human race, there are a few things to look forward to about next year. So let’s get at ’em. Here are the ten things I’m most excited about for 2017.


10 Simpsons Treehouse of Horror 28
Out of all the holiday traditions, this one is probably my favorite. Every year, I look forward to the Simpsons Halloween special. Most years, I walk away happy. (Barring that one episode that had Fran Drescher as a golem, there’s always at least one good segment in the bunch.) I doubt that that the writers will outdo themselves this year, but it's always fun to see them try.


9 Gorillaz: the new album
After so many years, the sort-of fictional, sort-of animated band will finally release new music. I’ve been jamming out to “Clint Eastwood” for so long now, that I’m quite excited for the new tunes. I’m perhaps even more excited to see what trippy, beautiful music videos we’ll get. I just hope the characters don’t get updated too much.


8 Friday the 13th: Part 13
At long freaking last, we get the next chapter in the Jason Voorhees saga. I mean, Jesus, the twelfth one came out years ago. You’d think that a horror movie franchise with the word “thirteen” in the name would get off its hockey-playing butt and grace us with the thirteenth installment before Mr. Voorhees enters retirement age. I have no idea if this movie will be good or not (signs point to not), but it better not get cancelled again. I’m going through machete withdrawals.


7 Heathers: The TV Show
Look, I’m less excited and more anxious about the Heathers reboot. I mean, Heathers is such a classic (my third favorite movie), and it’s going to be hard to recapture that nihilistic, quippy, off-putting, weirdly endearing magic on a weekly basis. What’s more, the new show’s premise (read the description here) seems like it really misses the point of the original. Still, if it works, it’ll be my favorite television show of the year. Hands down. It just has a pretty high bar to clear. In the meantime, I'll just slurp my slushie and rewatch the original.


6 Scooby Doo: Wild West!
Every year, Hanna Barbera (actually Warner Brothers) releases at least one direct-to-DVD Scooby Doo movie. Last year was kind of a bust (a crossover with WWE that was somehow even less charming than the previous crossover), but this year is about demon cowboys, so I’m in. If there’s a new Scooby Doo movie every year from now until eternity, I’ll be happy. Just no more professional wrestling ones, kay?


5 Evan’s Mystery Book
This year will mark the release of my next book, and it’ll be a little different from the other stuff I’ve written. I’ll be sure to keep you posted…

4 My Thirty-First Birthday
I already know that the thirties is going to be MY decade. I’ve had a pretty good run of it so far (you can’t complain while living in Zanzibar), but I have a feeling that 31 is going to be The Year of the Evan. At least, that’s what I tell myself every time I spot another gray beard hair.

3 Alien: Covenant
The new Alien/Prometheus sequel should be the kick-ass, cerebral movie event of the year. If not, I’m sure it’ll at least have some good visuals.

2 DuckTales
DuckTales is my fourth favorite TV program of all time. It shaped my sense of adventure, my pop culture proclivities, and my general worldview more than any other piece of entertainment. It was an extremely well-made, consistently fun program that sort of disappeared from the cultural conversation within the last fifteen years.


Thankfully, it’s finally coming back. Disney XD will debut new episodes sometime this year, and I can’t tell you how excited I am. It’s not CG (thank God), but it is slightly updated, which I’m fine with. As long as the sense of adventure remains the same, I will gladly take another swim in the money bin.


1 BHUTAN!
For those who don’t know, I will be moving to Bhutan at the end of this month. Also for those who don’t know, Bhutan is a tiny  Buddhist monarchy nestled in the Himalayas. It’s the only carbon negative country in the world. It’s also reportedly the happiest country in the world. There are no traffic lights. The quality of life is pretty high. And their leader doesn’t make fun of the handicapped or claim that global warming is a Chinese conspiracy, so at least there’s that. Anyway, this will be an exciting adventure for me. I’ll be there from January till December, which seems like enough time to (hopefully) see a Yeti! Fingers crossed.

And there you have it. My countdown of the ten most exciting things about 2017. Bring it on. And as John Oliver so eloquently described the previous calendar year: F*&% you, 2016!
Posted by Evan at 5:23 AM No comments: