Well, ladies and gentlemen… Today is American Thanksgiving Day… or as I like to call it: “National Re-Watch Addams Family Values Day.” Now for most people, it’s a day of food, family, and football. (I’d add a fourth F-word, but most couples are back at some family member’s house, which usually means that the mood isn’t right.)

Anyway, as far as holidays go, this one is kind of all-over-the-place. I personally have very little emotional attachment to pilgrims, and turkey is probably my fifth favorite variety of poultry. Growing up in a non-religious household, there wasn’t a lot of praying going on at the dinner table (aside from the few mumbled times I whispered, “Please, please, don’t let anyone mention politics”). I have vague memories of everyone taking turns announcing what they’re thankful for, though I think everyone except for grandparents was being sarcastic. But yeah, I still did all the traditional stuff. Leftover sandwiches. Parade-watching. I’m sure I made a whole flock of paper turkeys with my handprints.

(Fun Fact: a group of turkeys is not called a flock. It’s called a rafter. Because bird enthusiasts have way too much time on their hands.)
All of this is a long of saying: Happy Thanksgiving, world. While this holiday isn’t a particularly important one, at least not for me, it does occupy a very special place in my heart.
Because of the stuffing.
Also, a group of bluejays is called a party. Why can’t we just eat them instead?
Posted by Evan at 3:18 AM No comments:

Email ThisBlogThis!Share to TwitterShare to FacebookShare to Pinterest
Labels: biography 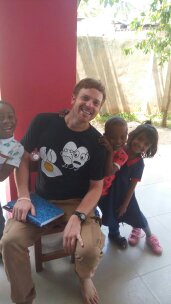 So this is me at the day job.
I feel so lucky to be working at
the British School of Zanzibar.
It is such a happy and creative place.
Posted by Evan at 11:15 PM No comments:

MERLIN and the WAR of the DRAGONS: A True Story


Anyway, Merlin is a TV show. And it’s also a mockbuster of the TV show. This Merlin, like the show’s main character, is a young and inexperienced wizard. This time, though, there’s no King Arthur. Not yet, anyway. Instead, we have a half-brother who has a dragon army. It’s pretty legit for a mockbuster, and much less of a time commitment than, say, a certain HBO show that has about forty lead characters.


I know it’s been a while since I’ve had a mockbuster come out, but this one should hit the spot. It’s about dragons!

It's the Most Wonderful Time of the Year 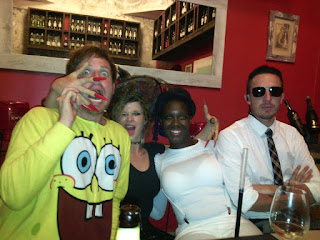