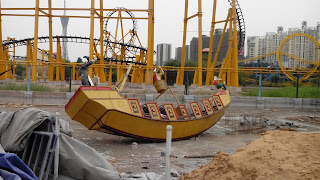 Living in China is an eye-opening experience. It’s frustrating and crazy, but it’s also a really, really fun time. The people are friendly and welcoming, the food is amazing, and—as long as you don’t name-drop Taiwan, Tibet, or Tiananmen Square—everything is safe. I lived there for three years, and one of my favorite experiences was going to the local theaters.

Now, thanks to globalization (and the fact that China is the most money-obsessed communist country around), giant multiplexes have sprung up all over the country. If you want to see the latest Iron Man sequel, you can check out some 3D glasses and enjoy the whole IMAX experience with hundreds of other screaming movie fans. It’s a lot like American theaters, except people don’t laugh at the same jokes.

IMAX is awesome, of course, but there’s something extra special about the mom-and-pop theaters that spring up in rural areas. You see, because of lax bootlegging laws, small towns in China will probably have at least one independent cinema. Here’s how they work:

2)      At the snack bar, you can get flavored popcorn (mostly strawberry-flavored, never with butter), sodas, and teas.

3)      There’s a big book of bootleg DVDs at the front counter. Usually, the movies are at least three months old. You pick something that looks interesting.

4)      The clerk ushers you into a small side room where a computer projects the movie on the wall. Sometimes the chairs are plastic. Sometimes, they are equipped with “5D technology,” which means they shake.

5)      You leave the theater and promise to come back again.

It might sound low-rent, but watching movies in an independent Chinese theater is a blast. Take, for example, my experience watching My Bloody Valentine 3D. Now, this movie is a gory, fast-paced 3D extravaganza. Body parts fly at the screen at regular intervals. And aside from a nonsensical climax, the whole thing is wildly entertaining.


In three glorious dimensions!
Now, picture yourself in a cheesy plastic chair with a metal bar across the front. Whenever someone gets murdered, the chair shakes like a crazy person. Sometimes air will blast at your feet. You’re sitting next to an elderly Chinese man who apparently had no idea what movie he was about to watch. He’s busy laughing at all the gory stuff. The two seats in front of you are reserved for your coworkers, a Ukrainian couple that keeps making out. Loudly.

And when the movie finally ends, you have no idea what just happened. It felt like that creepy boat ride scene from Willy Wonka and the Chocolate Factory. Oh, and you ate popcorn that tasted like strawberries.


I'm still woozy from that scene.
That’s pretty much the Chinese movie experience in a nutshell. While I went to lots of English-language movies when I lived there, my favorites were always the crazy horror movies. Final Destination 5, for example. Shark Night 3D. Those were the best movies to watch because the seats moved, the popcorn flowed, and there was always one elderly person who wandered into the theater without any idea what was going on.

Unfortunately, these movie houses are dying out. The government has cracked down and the Chinese audiences are opting for the big IMAX experience over the crappy projector-on-the-wall one. Nowadays, everything is so expensive and homogenized and… well, legal. The bootleg movie houses weren’t paying for their films, so no money was going back to the filmmakers. At least now, the right people are getting compensated for their hard work. Still, though, I’ll be sad when all these mini-theaters close down.

I’ll always remember the times I spent in a dark room, surrounded by laughing strangers, watching blurry jawbones fly at my head as my chair spun in circles.

My Experience with Turkish Horror

Have you ever seen a Turkish film? Well, considering that Baskin is only the eighth Turkish film officially released in America, signs point to no. Before writing this review, I asked my friends if they’d ever seen anything Turkish. All of them said no, except for the three glorious weirdos who purposely sat through Turkish Star Wars on grainy VHS. That should tell you something about the state of Turkish cinema, or at least America’s awareness of Turkish cinema.

My friends sure know how to pick 'em.
When I sat down to watch Baskin (don’t ask me what the title means), I had no preconceived notions at all. I knew the film was shocking—it had been recommended on one of my all-time favorite podcasts—and I knew it was Turkish, but that’s about it. Unlike other countries, Turkey didn’t have any preset style or viewpoint that I could prepare myself for. (When it comes to horror films, for example, I knew that Italian ones are colorful and Japanese ones are intense and Scandinavian ones are off-kilter.) Having that knowledge beforehand is helpful, which is why my experience watching this fever dream of a film was so intense. 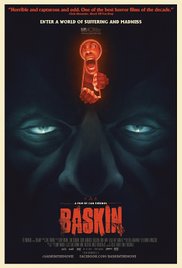 At no point in this film could I brace myself for what was about to happen next. Half the time, I didn’t even know what genre I was watching, or which character I should be paying the most attention to. In a very real way, it felt like I was walking away from a car accident. Everything was blurry and off, and I had to focus all my mental energy trying to decipher my surroundings.

If I had read a little bit about the film, or if I had more of an insight into Turkish culture, prehaps things would’ve been less jarring. But jeeze, was I jarred.

Please don’t assume I didn’t like this film. I did. I loved it. It was one of the most memorable viewing experiences of my life. But it absolutely is not for mainstream audiences… or squeamish people… or overly analytical people… or animal lovers. It’s a tough pill to swallow, and I think you know if you’re the kind of person interested in swallowing this brand of pill.

Because so much of my enjoyment of the film comes from my slack-jawed shock, I don’t want to give away too much of the story. I will say, though, that it often operates on dream logic, that there are some very memorable special effects, and that conversations from early in the film get some definite (wince-inducing) pay-offs at the end. It stars a group of cops wandering into a place they shouldn’t, and the most effective moments are the inexplicable ones.


Don't watch this trailer.
Other than that… you’re on your own. If you want to watch this film, don’t read anything about it beforehand. And if you don’t watch this film, please look up its Wikipedia page to see exactly what craziness you are (wisely) avoiding. Either way, be careful.

And if this is representative of what Turkish filmmakers have to offer, I sincerely hope that more of them will release their films in America. That way, I won’t be the only person in my friend group with recurring nightmares about raw meat.
Posted by Evan at 10:57 PM No comments: