Last year, I wrote a romantic fantasy called Island on Fire. I was sick of reading about vampires and other pale guys who morph into wolves and stuff, so I decided to use a completely different fantasy world: Hawaiian mythology. Of course, a bunch of books have used Hawaiian creatures before, and tropical volcanoes will always be great settings for fiction, but I felt that Hawaiian mythology wasn’t nearly as overused as other legends.

My plan is to get this story released sometime next year. Nothing’s in place yet, but I really have high hopes for this one. It has an interesting conflict, and a really vivid setting.

But you can see for yourself. The first chapter is available on Harlequin’s website. Tell me what you think. Are you enjoying the characters as much as I enjoyed writing about them?
Posted by Evan at 6:58 AM No comments: 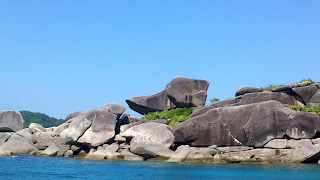 A New Western Serial Is Riding Your Way


Hey everyone! Big news! My dad has a brand new western mystery coming out through an online publisher called Mysterical-E. It’s a cliffhanger serial released in three parts, and the first part can be found here. It’s a little bit funny, a little bit exciting, and there are plenty of shoot-outs, horse chases, and secret experiments. Plus, it takes place in early Hollywood, so expect a lot of real stars with dangerous secrets.
Posted by Evan at 6:53 AM No comments:


Everybody has a microwave. It’s an important part of any kitchen, especially if you’re lazy and/or addicted to ramen noodles. But what did it feel like to be the first housewife to use a microwave? Did she understand how it worked? Did she worry about radiation?

I decided to write a horror story about an unhappy housewife (a desperate one, if you will) who doesn’t trust her new microwave. And when she starts hearing tapping noises from the other side of the glass, she starts to wonder if maybe this kitchen appliance is actually a doorway to somewhere else. Somewhere dark.

If that sounds interesting to you, check out my brand new story “Microwave Technology.” It’s part of a horror anthology with a bunch of creepy creatures and horrible happenings. Why don’t you curl up with a nice bag of microwave popcorn and prepare to be scared.
Posted by Evan at 6:59 AM No comments:


Hey everyone! I got a nice shout-out in Bleeding Cool News. They wrote some pretty nice things about the Mythos Grimmly anthology that’s coming out later this year. Check out the article. And I’ll be sure to keep you posted about when this one is released.
Posted by Evan at 7:02 AM No comments: